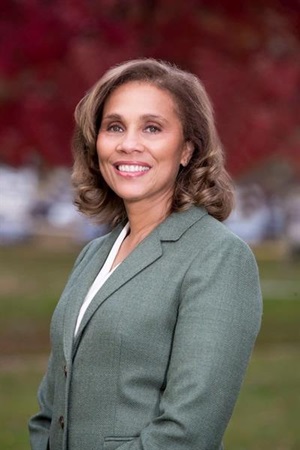 Tell us about your family.
They are awesome! My immediate family includes my husband of over 30 years who served our Nation as an Army Medical Service Corps officer for three decades. He was a MEDEVAC pilot, and also led Combat Medical Hospitals during the surges in Iraq and Afghanistan – a true hero! We also have two phenomenal children. Our daughter is an alumna of Villanova University, and recently earned her JD at GWU Law School. Our son is a West Point grad and is serving as a Field Artillery officer. I am so proud, honored and humbled to have such a special family – they keep me grounded and remind me of what is really important in life.

Your military career is inspiring to all of us – why did you choose that career path and how did it shape you as an individual?
My desire to become a soldier came from my dad, and the passion with which he spoke about his time in the Army. When he joined in 1939, the Army was still segregated, but he wanted to serve his country anyway. During his initial training, he noticed that over time, the all-White cadre started to view him and the other Black recruits less as “those people” and more as “our soldiers.” It wasn’t perfect, but he saw it as a model of how people can change if they are able to interact and truly get to know one another. He saw the Army lead the way in change for the better as well as being a noble profession, and decided to stay in. By the time he retired, he had served in WWII, during the Korean and Vietnam War eras, and for over 30 years. He encouraged my brothers and sisters and me to join as well, as he believed serving our nation was a solemn duty and a privilege. He, along with my mother, stressed the importance of selfless service, duty, commitment and integrity, values that were honed during his time in the Army. Growing up, I watched nine of my brothers and sisters join the Army (Women’s Army Corps for my sisters), Women’s Auxiliary Air Force, or Navy, and I could not wait to follow my dad and them. Their example, and then being steeped in the lessons of leadership, and the importance of character and values while serving in our Army, help shape me as an individual.

Who are your mentors?
The strongest mentors I had were my parents. They were people of very strong faith, and they passed that faith onto me. They taught me from an early age the importance of being a person of character and integrity. They showed, by example, how to be disciplined and responsible, and how to persevere in the toughest of times. They instilled in me how important it was to study hard, work hard and focus on getting a good education. They prepared me and set the stage that allowed me to achieve the success that I have been fortunate to realize.

Throughout my career, at every level, I had a diverse group of people who supported me, challenged me, and provided opportunities for growth and advancement. Many of my mentors emerged from unexpected places. Having an open mind allowed me to learn from those I might not have considered traditional mentors. Some of the greatest lessons came from them.

You gave a poignant interview to the New York Times on the power of empathy and how important it is for leaders to possess. What other traits are important for leaders – and particularly women leaders?
I believe most of the traits that leaders need to possess are captured in the overarching category of “character.” Besides being competent in their areas of expertise, leaders must also be individuals that can be trusted by their team. They have to have integrity, properly placed loyalty, commitment to their duty to lead, the discipline to conduct themselves honorably at all times, and the habit of treating everyone with dignity and respect, no matter their status in the organization. Leaders must also be selfless in how they lead, making sure their focus is on accomplishing the mission or task at hand, improving the organization, and making sure their people get the guidance, support and resources they need to be successful, and not on personal gain or self-promotion. Leaders must also possess personal courage to do the right thing, for the right reason, and in the right way, even if it is hard or unpopular, or puts them at professional risk if they may be at odds with their superiors. Other important attributes are agility and adaptability – being able to flex to what the situation requires with minimal drama. It is also important, especially for women, to be their “authentic” selves. We hear that term a lot, but in action it means not trying to take on an expected persona to lead. Incorporating your personality and unique style into your interactions and leadership will allow those you lead to see and appreciate the genuine “you” and what you bring to the table.